Gigabyte Passive Optical Network, known as GPON, rely on fiber optic cables to deliver video, data and voice signals. GPON networks are currently the leading form of Passive Optical Networks (PONs), and offer up to a 1:64 ratio on a single optical fiber, meaning, a single fiber from the OLT can deliver video, data and voice signals to up to 64 end users (or residences).

Typical GPON Network with and without WiFi:

The following image shows how the GPON OLT device deployed in a typical GPON network delivers services to end users by way of a GPON ONT installed inside the house:

A typical GPON network is pretty straightforward. It consists of an OLT (Optical Line Terminal), ONT (Optical Network Terminal, and sometimes called an ONU, Optical Network Unit), and an optical splitter.Signals from the central office OLT transmits to the splitter, then the splitter spreads the signal to the GPON ONT which resides inside the home of the end user. From the ONT, the end user can connect all of their personal video, data and voice, data and voice devices like computers, televisions and VoIP phones.

Let’s breakdown the components of a typical GPON network:

The OLT is the ultimate network manager and controls all of the GPON network traffic, in the form video, data and voice signals, and sends them downstream to the ONTs on the other end. The OLT also receives these signals from the end user’s ONT, and sends them on their way to their destination over the Internet. 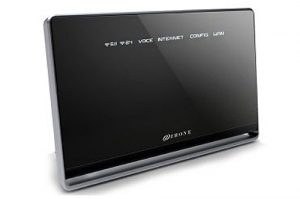 The ONT is an ‘optical modem’ that connects to the opposite end of the OLT – at the end user’s residence. It acts as the interface with the end user’s equipment – computers, televisions, WiFi, VoIP phones, etc. Data received from the end user is then aggregated, optimized and sent by the ONT to the upstream OLT. ONT’s also have the ability to broadcast WiFi throughout the end user’s home – see how below.

Learn more about DZS’s ONTs
The ONT is also known as Optical Network Unit (ONU). ONT is an ITU-T term, while ONU is an IEEE term. They both refer to the end user side equipment in a GPON network. A small difference between them might be the application locations. ONUs can work in different temperature and weather conditions. 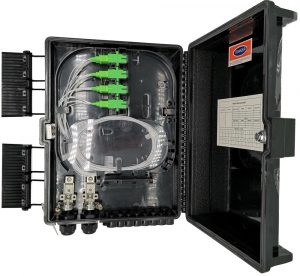 Optical Splitters play an important role in GPON networks by allowing a single fiber optic cable to be shared, or split, among many end users. Optical Splitters are installed in each GPON network between the GPON OLT and the GPON ONTs that the OLT serves. Although it sounds simple, splitting level and ratio designs must be taken into consideration when designing a GPON network. For example, one optical splitter can provide video, data and voice services for up to 64 end users in a number of topographies including centralized, where one splitter distributes the signals to 64 end users; and cascade splitting, where one splitter distributes the signals to other splitters which then delivers the signals to up to 64 end users.

Another Feature of the ONT: WiFi

Not only does the ONT have the ability to deliver video, data and voice traffic for the end user devices, most can also broadcast WiFi signals throughout the house. Connecting a DZS MESH-2100 to the GPON ONT provides the ability to connect WiFi enabled devices to the ONT to both receive and send over the GPON network the same as wired devices.

A typical GPON network that includes WiFi would look like this:

The most obvious advantage of PON networks is that a single shared optical fiber can support multiple users through the use of inexpensive passive optical splitters. In GPON networks, up to 64 ONTs can share one fiber connection to the OLT. This makes Gigabit Passive Optical Network an attractive option for service providers wanting to replace copper networks with fiber, particularly in high-density urban areas.

How far does GPON reach?

The distance between the GPON OLT and the ONT is generally determined by the launch power of the optical transmitter, receive sensitivity of the far end receiver, and the optical loss associated with the optical distribution network (ODN). Optical loss comes primarily from connectors, splices, and splitter.

Think of it this way: Say you have a garden hose with water under normal pressure, and you attach a showerhead with 128 holes. Then you plug up all but 3 of those holes, the holes that are open will squirt out water very far (as far as 40km, providing services to those 3 end users). However, if you put on that same showerhead and unplug all 128 of the holes, the water won’t go far (as far as 20km), but it will saturate the immediate area (provide services for up to 128 end users). Important to remember: The over-all water capacity of the hose is not impacted by the distance or split ratio – it will still carry all of the water from the source to the end, no matter what type of showerhead is attached.

DASAN Zhone Solutions (DZS), offers a wide range of GPON Products and Solutions for GPON Networks ranging from OLTs that serve many thousands of customers, to WiFi enabled ONTs that reside at the residential user’s home.

A single fiber from the OLT can deliver video, data and voice signals to hundreds of end users, and understanding a GPON Network is easier than you think. Take a closer look at how a GPON OLT device deployed in a typical GPON network delivers services to end users by way of a GPON ONT installed inside the home. GPON Network Components

The Need for Speed: Migrating your GPON Network to XGS-PON

DZS offers the largest ONT Portfolio for GPON or Active Ethernet Gigabit Broadband Internet offerings. When terminating that Single Mode Fiber at the home you need flexibility when selecting an ONT to support your Data, Video, Voice, and Power over Ethernet (PoE) Devices. ZNID Series of GPON ONTs