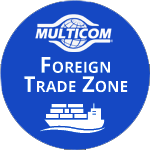 Sherman Miller, President and CEO of Multicom elaborated, “Having a Foreign-Trade Zone in our Longwood warehouse gives Multicom a strategic advantage by allowing us the ability to continue competing in international markets and global value chains with the elimination of certain taxes and tariffs. In addition, we feel strongly that our new FTZ will also bring new employment opportunities and help to support the local economy.”

Multicom, a winner of the President’s ‘E’ Award for outstanding contributions to the export expansion of the U.S.A., and a member of the U.S. District Export Council, has been a leader in foreign exporting in Central Florida for over 20 years.

Established in 1982 and headquartered in Orlando, FL, Multicom, a manufacturer and stocking distributor, maintains sales offices, rep agencies and sub-distributors throughout North and Latin America. Multicom stocks over 19,000 products from more than 380 of the world’s major manufacturers which are used to acquire, process, and distribute audio, voice, video, data, energy, and traffic control signals over fiber optic, copper, coax cable, and wireless.