It’s complicated out there! Some of the technical language relating to purchasing a TV or TV tuner can seem difficult. It is common to see terms like ATSC, NTSC, and QAM being used, and it is important to understand what each term means and what the difference is between each of them.

But first, it is important to understand that TV signals are usually received in one of two ways, either by antenna or cable:

And second, it’s also important to understand that the worldwide broadcasting formats are not standardized – different parts of the world use different formats which adds to the confusion and the abundance of letters – ATSC, NTSC, QAM… and many more. 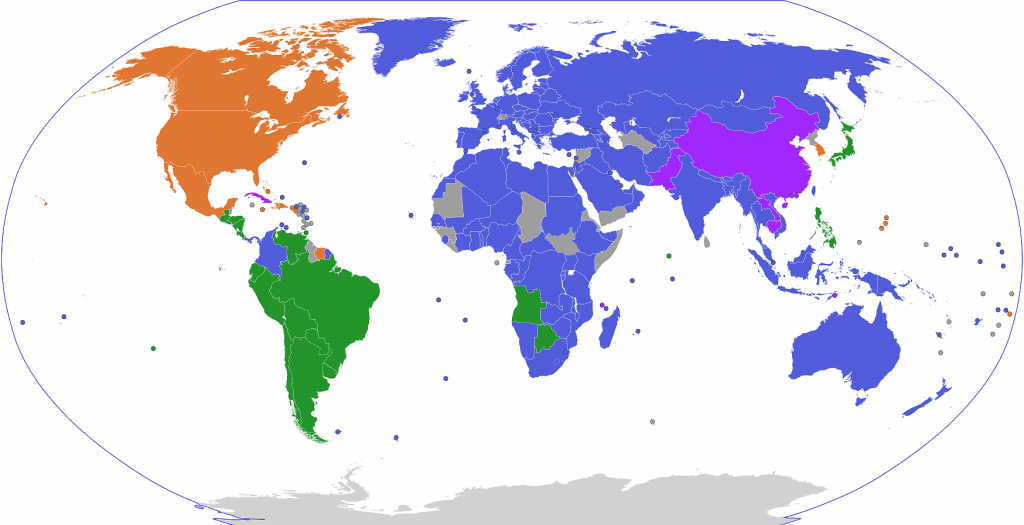 There are a lot of colors on this maps. The main ones to understand are:

NTSC stands for the National Television System Committee, which were the group who introduced the original standards for analog TV transmission in the USA back back in the early 1940s. NTSC is generally used to refer to the old analog signal which was first adopted in the USA in the 1940s. It has largely been phased out in favor of digital ATSC broadcasting. NTSC is inferior to ATSC, as it is doesn’t deliver HDTV picture quality, or the widescreen format. Audio audio quality is also inferior.

As well as the USA and Canada, the NTSC system was or is used in Central America, the Caribbean, parts of South America, and in several Asian countries including Japan. High-power OTA NTSC broadcasting was switched off in 2009 in the USA, and in 2011 it was discontinued in Canada and most of the other countries.

ATSC stands for the Advanced Television Systems Committee, which is the group that replaced the NTSC in the USA in 1982. ATSC is the OTA digital signal used in the USA. It is superior to the old NTSC analog system because it can deliver HDTV picture quality in a wide screen format, as well as being capable of providing theater quality audio.

To use an analog TV with ATSC you need a converter that is capable of handling the digital signal. The Federal Communication Commission (FCC) require that all new TVs have built-in ATSC tuners.

QAM stands for Quadrature Amplitude Modulation. QAM is essentially the cable version of ATSC, with QAM tuners allowing your TV to receive unencrypted digital signals from a cable provider (a cable box is required for the encrypted ones). In the cable television industry, QAM systems are used by Multi-System Operators (MSOs), and other network operators to deliver video, voice and data services. QAM systems are the mechanisms where signals are processed and distributed over a cable system and to be delivered to subscribers’ homes where set top boxes and cable modems convert the QAM signals back into useful voice, data and video.

This means that you generally will get free, usually local cable channels with a QAM tuner, but you will need a cable box or cable card to get the channels that are provided by the cable television providers.

DVB-T stands for Digital Video Broadcast – Terrestrial, and is the now the most common system used in Africa. Set-top boxes used by South Africa-based DSTV or Multi-Choice TV in a number of sub-Saharan African countries are based on this standard. Most (but not all) HDTV systems that are compliant with the ATSC standard are also compliant with the DVB-T standard.

ISDB stands for Integrated Services Digital Broadcasting, and there are three types of ISDB – ISDB-S (satellite television), ISDB-T (terrestrial), ISDB-C (cable). All ISDB broadcasting is based on MPEG-2 or MPEG-4 standard for multiplexing with transport stream structure and video and audio coding (MPEG-2 or H.264), and are capable of high definition television (HDTV) and standard definition television