First off, what is Wave Division Multiplexing?

Wave Division Multiplexing, better known as ‘WDM‘, is a method of combining or separating multiple wavelengths of light in or out of a single strand of fiber with each wavelength of light carrying a different signal, like a voice signal, video signal and/or data signal. The use of optical filters allows a certain range of wavelengths and lets another range of wavelengths pass through. Using a WDM in your network is a cost effective way to increase the capacity of a network.

Without a WDM, a single fiber would be dedicated to each customer’s voice, video or data device from the headend, or originating source, to the end user. This would account for a lot of fiber and potentially a lot of extra expense.

Multiple fibers from the headend to the end user – that’s a lot of fiber!

The foundation of WDM lies in the ability to send different data types over fiber networks in the form of light. By allowing different light channels, each with a unique wavelength, to be sent simultaneously over an optical fiber network a single virtual fiber network is created. Instead of using multiple fibers for each and every service (as above), a single fiber can be shared for several services (as below).

The WDM gathers all data streams together to be transported simultaneously over a single fiber.

With a WDM, a single fiber is used from the headend, or originating source, to the end user. Within that single fiber are varying wavelengths that handle all of the voice, video and data usage.

There are two different types of WDMs:

Typically CWDM and DWDM have lower insertion losses compared to the use of optical splitters. This significantly increases the reach of the network from the central office. Moreover, every customer has an assigned wavelength(s), providing greater security and making eavesdropping difficult if not impossible.

From end to end, Multicom has the Fiber Optic Passives to complete your fiber optic network

One Fiber vs. Two Fibers 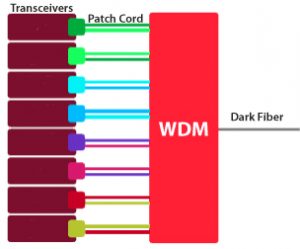 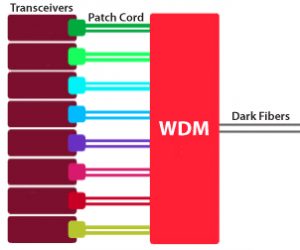 Passive Optical Components can have a significant impact on the efficiency of communication network roll-outs. The incorporation of passive WDM devices reduces the amount of fibers in the network, decreasing both the footprint and investment cost of network roll-outs. In existing networks, these components allow capacity upgrades at a relatively low cost without additional construction works.